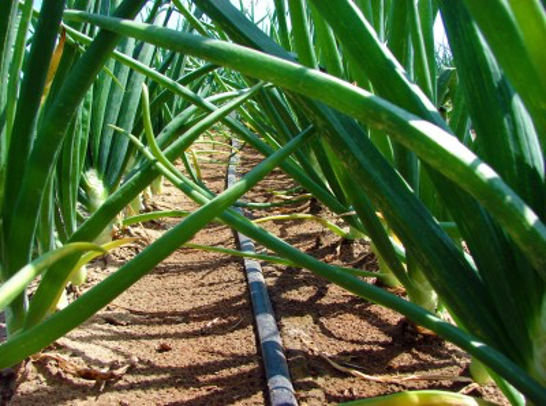 Onions have specific nutrient requirements for best results. While many focus on the typical N-P-K requirements, onions have several other nutrient needs that are also very crucial to your crop. Below is a list nutrients that should be incorporated throughout your growing process for best results. Our Dixondale Farms Onion Special 10-20-10 has been blended with all of the micronutrients needed to get your onions off to a great start. Below are details for each nutrient need and signs of deficiencies you may see in your onion patch.

Nitrogen (N) especially in nitrate (NO3) form, is extremely leachable. If too little nitrogen is available, onions can be severely stunted. High nitrogen rates are believed to produce succulent plants that are more susceptible to chilling or freezing injury and disease, and to production of flower stalks. Onions, heavily fertilized with nitrogen, are believed to not store well. Finally, excess nitrogen late in the growing season is believed to delay maturity and causes double centers. Make the final nitrogen application at least 4 weeks prior to harvest; this should also be about the time you see bulbing beginning. Our advice is to cut the nitrogen applications as soon as the onion shows signs of bulbing like ground cracking around the plant. If you were to continue to apply nitrogen, the plant would keep sending it’s energy to growing tops rather than bulbing. Bulbing is result of the transfer of carbohydrates from the tops to the bulb. Therefore, big tops will translate into big bulbs. Feed your plants with nitrogen from the very beginning to ensure you grow those large bulbs. Rates of nitrogen vary depending on soil type, rainfall, irrigation, plant populations, and method and timing of applications. Ammonium Sulfate 21-0-0 is generally recommended for nitrogen applications, but in cases with more acidic soils, Ammonium Nitrate is our recommendation.

Nitrogen deficiencies result in stunted plants with pale green to yellow leaves that die-back from the tips.  Also, the foliage tends to be erect and bulbs which are smaller than normal mature earlier. Crops may become deficient under conditions of poor drainage, low temperature, or in very wet seasons where applied nitrogen is leached below root access, especially when plant populations are high.

Phosphorus (P) is essential for rapid root development. It is found in adequate levels in most soils but is not readily available at low soil temperatures. Because of these factors, under most conditions, apply all of the P pre-plant and incorporate before transplanting.

Phosphorus deficiencies result in slow growth, delayed maturity, and a high percentage of thick-necked bulbs at harvest.  Thick necks are more difficult to cure down properly during harvest/storage meaning they won’t last as a long in storage. Leaves become a dull green color and die-back from the tips without yellowing associated with nitrogen and potassium deficiencies.

Potassium (K) is an important factor in plant-water relations, cell-wall formation, and energy reactions in the plant. Potassium is subject to leaching from heavy rainfall or irrigation. A low potassium level makes plants more susceptible to cold injury.

Potassium deficiencies result in the foliage initially becoming darker green and the tips of the older leaves begin to wilt, especially on the upper surface.  Eventually the leaves droop and take on a satiny feel progressing to paper-like appearance and develop chlorosis similar to that caused by nitrogen deficiencies. Deficiency can occur as a result of leaching from sandy soils during periods of heavy rain.

Zinc (Zn) levels determined to be low by soil testing can be corrected by applying 5 pounds of Zn per acre. Excessive amounts of Zn can be toxic, so apply only if needed. Zinc is usually added in the pre-plant fertilizer or can be applied with certain products such as Mancozeb Fungicide with Zinc.

Zinc deficiencies result in stunted plant growth with noticeable twisting or rippling and faint interveinal chlorosis of the leaves.  Onions are very sensitive to zinc deficiencies and leaves may begin to fall too early before the plants are actually ready for harvest.

Magnesium (Mg) levels in the soil must be adequate for good onion growth. If dolomitic limestone is used in the liming program, it will usually supply some of the required Mg. However, if soil pH is adequate and the soil test Mg level is low, apply Mg with the pre-plant fertilizer if Mg is not already included in the pre-plant fertilizer. Epson salts can also be used for treatment of magnesium deficiency.

Magnesium deficiencies result in stunted plant growth with the older leaves becoming uniformly yellow along their entire length. Only occurs on soils which have low extractable Mg levels and occasionally on soils with very high extractable potassium/magnesium ratios particularly if soil compaction is present. May also see signs of leaves falling too early.

Sulfur (S) is an essential element for plant growth. Early applications of sulfur are advisable in direct-seeded and transplanted onions. To minimize pungency in mature onions, apply fertilizers containing sulfur in early stages of plant growth. Research conducted in Georgia on S and onion pungency shows that pungency (pyruvate analysis) of mature onions increases with high rates of S or whenever S applications take place in later stages of growth. Therefore, do not apply S to onions after bulbing begins unless the onions exhibit S deficiency, but do not completely eliminate S from the fertility program.

Sulfur deficiencies will result in leaves becoming thick and deformed with new leaves turning yellow. In extremely deficient cases, new leaves are short, thickened and chlorotic. This can occur in sand and shallow soils over chalk or limestone, in areas with low levels of atmospheric deposition of sulfur.

Boron (B) is required by direct-seeded or transplanted onions in the field. If the soil test shows B levels are low, apply boron and incorporate prior to transplanting or seeding. Do not exceed the recommended amount since boron can be toxic to onions.

Boron deficiencies in onions causes leaves to turn blue/green, and the younger leaves become mottled with distorted shrunken areas. Cracks may appear on the upper surface of the lower leaves, which become stiff and brittle. Root development is poor. Over-wintering may be impaired by boron deficiency. This deficiency is pretty rare but may occur in areas of high rainfall particularly on light soils at pH over 6.5.

Onions show striped chlorosis of outer leaves, followed by necrosis with growth severely reduced. Also may see leaf curling, reduced bulbing, and thick necks. Mn deficiencies are most severe on organic, peaty and marshland soils at pH values over 6.0 and on heathland soils at pH levels above 6.5. Symptoms are often transient and may disappear following rain. Low pH may cause Mn toxicity. Mancozeb Fungicide with Zinc also includes Manganese and can be applied for treatment.

In onions tips of youngest leaves become chlorotic, turn white and twist into spiral or bend at right angles to
rest of plant. Bulb scales become soft, pale yellow and thin. Look for a liquid copper product, which also acts as a fungicide to boost copper levels in your onions.

In onions, lack of calcium appears as the die back of young leaves without prior yellowing, or death of a short length of leaf causing the distal part to collapse and die. Occurrence is extremely rare.

Have specific nutrient questions about your onions?

We hope that these descriptions help our customers to better recognize signs of nutrient deficiencies. As always our customer service team is available year-round to help you through all of your growing questions!

Please note that some of these photos are from very old studies and the quality may be poor, but we want to show these deficiencies as best as possible to help our customers address and prevent these in their gardens. 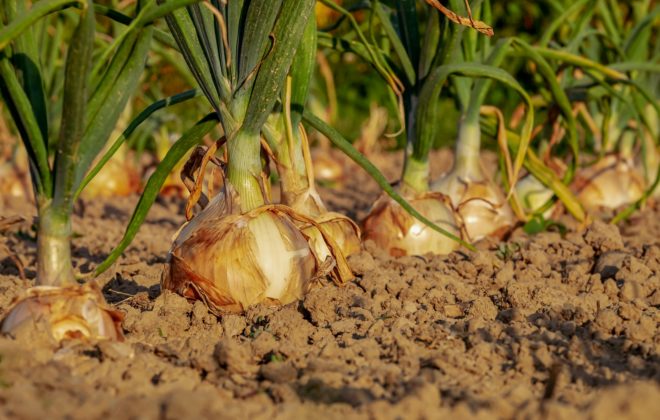 Being Proactive Against Fungal Disease in Onions

Where to Plant Your Onions 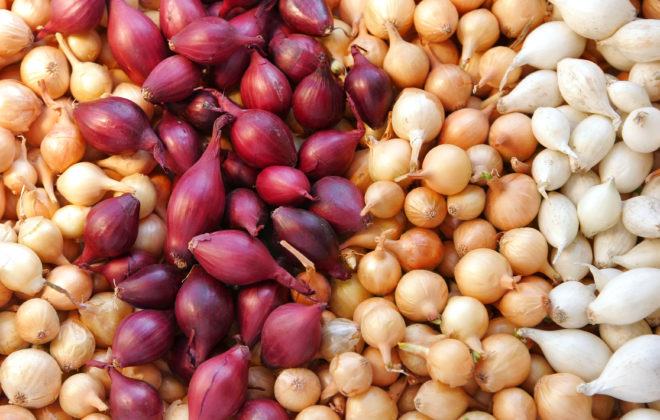